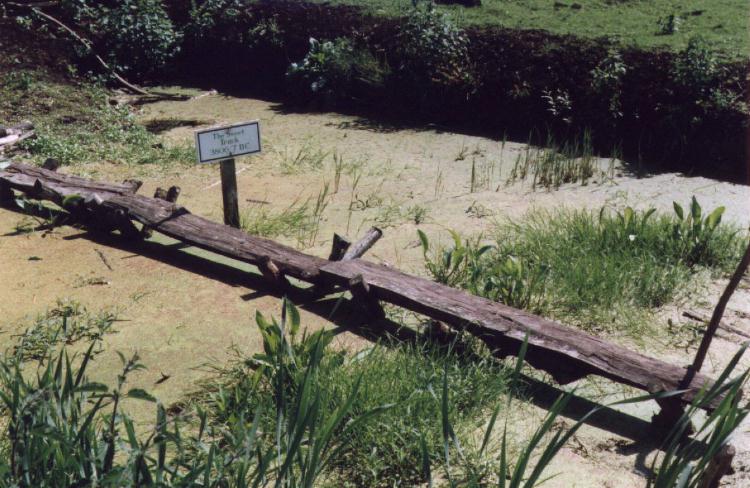 Coppicing dates back thousands of years and evidence suggests it was carried out as far back as Neolithic times. Archaeologists have discovered an ancient causeway in the Somerset Levels, England, now known as the ‘Sweet Track’, that was built across boggy ground, almost entirely from coppiced wood. It was built around 3800 BC and is claimed to be the oldest known road in the world. It was built using a variety of tree and shrub species including oak, ash, lime, hazel, alder, holly, willow, poplar, dogwood, ivy, birch and apple.

Records show that by the mid 13th century, most of our woodlands were managed as pure coppice (single species), mixed coppice (multiple species) or coppice with standards (where some trees, usually oak or ash, are left to grow on to maturity to produce larger sized timber). Coppice provided a constant supply of local, manageably sized timber, which was easy to handle, and transport by river or cart, something that was very important before the days of specialist machinery capable of transporting large timber.

Coppice and high canopy woodlands were an essential resource for medieval Britain, providing the raw materials for many essential craft industries, timber for houses and Tudor warships and fuel. 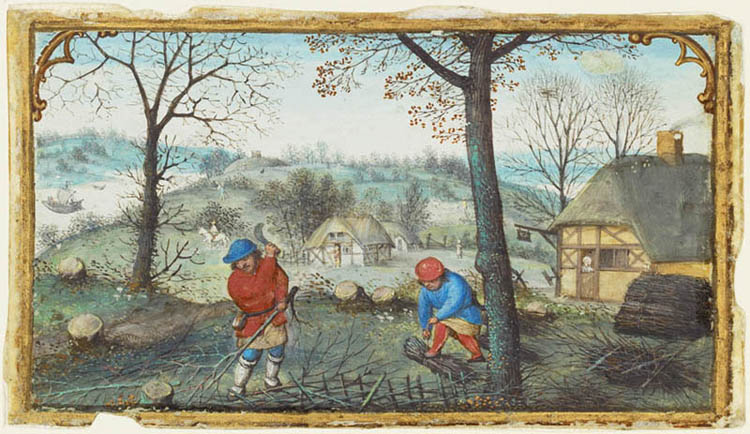 Gathering Twigs by Simon Bening, circa 1550

The 16th and 17th centuries brought about new markets for woodland produce, primarily providing charcoal to fuel the early iron industry which continued up until the late 19th century when cheap coal became available, replacing charcoal and wood as the main form of fuel.

The end of World War 1 saw a dramatic change in our woodlands. The majority of our timber reserves had been used up for the war effort and as a result, in order to replenish stocks quickly, large areas of clear felled broadleaf woodland were planted up with faster growing softwood. Other clear felled areas were given over to agriculture and this practice continued up until more recent times (mid-20th century), as the demand for coppice products declined due to mass production of cheap products using high tech machinery and modern materials such as plastics.

With the decline of the coppice industry, many coppice woodlands became economically unviable. With little demand for coppice products, the coppice cycle stopped and the woods were left unmanaged, becoming overgrown and reverting to poor quality high canopy, or alternatively, planted up with conifers or grubbed up for grazing or food production.

The 1970’s and 1980’s saw the start of a coppice revival. Due to the decline in wildlife and flora and fauna associated with unmanaged coppice woodland, conservation groups started to buy and bring overstood ancient coppice back into rotation. Allowing light back to the woodland floor has seen the return of many declining woodland plant species such as orchids, bluebells, dog violets, wood anemones and ramsons (wild garlic) to name but a few.

All of which are very important to a great number of insects and invertebrates including various bees, leaf beetles and jumping spiders, moths and butterflies including the silver washed fritillary, and benefit various birds and small mammals including whitethroats, warblers, and nightingales, bank vole, pygmy shrew, harvest mice and dormice.

Today, we are experiencing a resurgence in coppicing. As oil supply is running out (we are using oil and its derivatives faster than we can extract and refine them – known as ‘Peak Oil’) resulting in escalating oil prices, we are turning to sustainable forms of energy. The demand for coppice wood is high, as more and more people are installing wood burners or bio mass boilers. There has also been a resurgence in woodland crafts which by the end of the 1960’s had all but died out apart from a few old woodsmen, who managed to pass on their skills to a small band enthusiasts. The popularity of green woodworking a has risen dramatically in recent years as a result of greenwood craftsmen such as Herbert Edlin, Ray Tabor and Mike Abbott, to name but a few, demonstrating and running courses in green wood crafts and by recording and documenting our traditional woodland crafts for future generations to come.